In recent months there has been much in the media about the challenges facing boys’ schools.

Schools can be the best and the worst of places.

Intriguingly, as we have all been through school, we all have an opinion as to what we believe constitutes a good schooling experience. However, progress has changed aspects of education in the same way that progress has changed so many sectors in the time since we, the adults, were at school. Yet, perhaps more than in other sectors, one’s opinion of what constitutes a good schooling experience lingers in our minds disproportionately as we follow, often vicariously, our children’s pathway through school.

Boys-only schools seem to attract much negativity when things go awry because the public sentiment is such that these schools are steeped in primitive practices which perpetuate the über masculine stereotype previous generations of schoolboys grew up with. And, sadly, in some cases this sentiment is correct.

The fallacy that “boys will be boys”, and so they will make more poor choices when they bandy together, alongside a shallow portrayal of manhood that celebrates brawn over brain, paints a poor picture of the men we aim to produce in an all boys environment. This is desperately unfortunate.

It is imperative that we challenge these stereotypical notions regularly and acutely. But how?

When boys are encouraged to perpetuate a narrow version of manhood, sometimes by each other, sometimes by fathers, often by societal norms, the task of educators in boys’ schools is more difficult.

When schools place undue emphasis on narrow metrics to gauge success, a poor definition of manhood takes root, and this can perpetuate a problematic, weak and victimising culture at a school. Bullying, belittling and “ become the norm and this vicious cycle is self perpetuating.

However, most boys’ schools are hard at work trying to change this negative pattern, but we will only win when we the adults, parents and teachers, accept that our experience of schooling may itself have been narrow and thus ill-fitting for this changed world. Today’s great boys’ schools capitalise on enduring value sets but work with great focus at establishing a narrative which speaks unwaveringly and unapologetically to a manhood that is alive to a world rich in diversity and inclusion. This is a very different world to that which was, even a mere 25 years ago.

This may mean altering the picture we may have sketched of our children’s schooling and allowing space for a new vision of an ideal schooling experience, which may be fundamentally different from that which we experienced, to embed itself. Normally, change only occurs when we are prepared to forego an old version for that of another.

I believe there remains a definitive role for boys’ schools in today’s world. However I do not believe they can be a carbon copy of a boys’ school of old. Today’s schools for boys need to embrace the refreshing reality of greater difference among boys; they need to champion those boys who choose the arts over sport; they need to foster freedom of thought and freedom of association; they need to develop a plethora of voices and avoid a single narrative; they need to celebrate gentleness and encourage empathy; they need to honour peacemakers and recognise quiet strength; they need to major on character development and minor on achievements.

A shift will take time, there are many headwinds, but we may not give in. Society needs men who are equipped to change and challenge the stereotypical negative narrative espoused in the adage “boys will be boys”.

As a parent of a boy at Hilton, I do hope you will encourage your son to make this journey with his housemaster, his educators, his coach, his friends. As a headmaster, I ask for your partnering in this important work. Let’s ensure that our measures of success are broad, authentic, enduring and honest; let’s not be caught up in the false euphoria of yesteryear, based on our experience in a world that may have espoused a narrow version of manhood.

Your sons deserve an education that develops them into the best versions of the men they need to be. This great boys’ school will not waver from this aim and ideal. 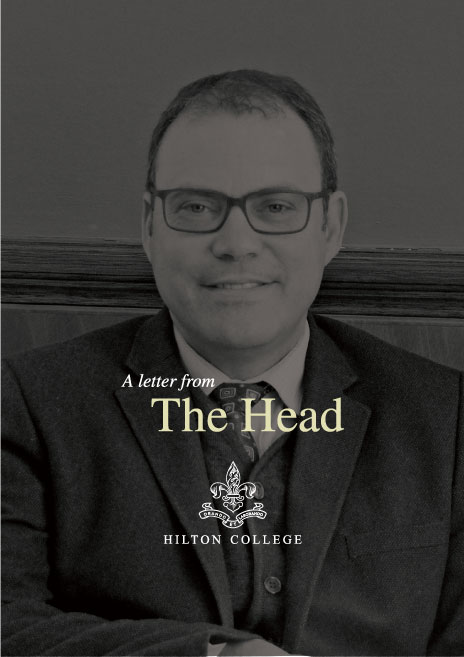